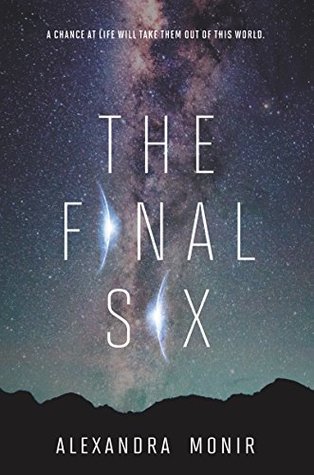 Synopsis:
Set in the near future, this action-packed YA novel—already optioned by Sony—will take readers out of their world and on a quest to become one of six teens sent on a mission to Jupiter’s moon.

When Leo, an Italian championship swimmer, and Naomi, a science genius from California, are two of the twenty-four teens drafted into the International Space Training Camp, their lives are forever altered. After erratic climate change has made Earth a dangerous place to live, the fate of the population rests on the shoulders of the final six who will be scouting a new planet. Intense training, global scrutiny, and cutthroat opponents are only a few of the hurdles the contestants must endure in this competition.

For Leo, the prospect of traveling to Europa—Jupiter’s moon—to help resettle humankind is just the sense of purpose he’s been yearning for since losing his entire family in the flooding of Rome. Naomi, after learning of a similar space mission that mysteriously failed, suspects the ISTC isn’t being up front with them about what’s at risk.

As the race to the final six advances, the tests get more challenging—even deadly. With pressure mounting, Naomi finds an unexpected friend in Leo, and the two grow closer with each mind-boggling experience they encounter. But it’s only when the finalists become fewer and their destinies grow nearer that the two can fathom the full weight of everything at stake: the world, the stars, and their lives.

Welcome to my stop on the blog tour for The Final Six Andrea Monir, hosted by Fantastic Flying Book Shop! You should totally follow the blog tour and check out previous and future stops here! Keep on scrolling down for more information and enter the giveaway!

In The Final Six, twenty-four teens are hand-selected and drafted into the International Space Training Camp in an effort to expand humanity on Europa, Jupiter’s moon. As the world in the distant-future continues to be dominated by rising waters and forces, Leo and Naomi face off against others for the chance to be one of the final six to be on the mission. They could be the only hope humanity has, but what if everything they know may not be as what it seems to be?

One of the many pros this book has is the use of diversity. Naomi is Iranian-American. Leo is Italian. The other twenty two teenagers are from around the world, giving the perfect sense of diversity and it has been used very well. Although the teenagers are split into different teams, the feel of diversity is still there. This is a major plus for the story as it offers different views and takes on the space mission.

As the story progresses and the teams go through various tasks to prepare for launch, Leo gets more excited and more confident for the mission. On the other hand, Naomi has suspicions and isn’t eager for the mission just yet. As the story continues to go through alternate perspectives between Leo and Naomi, it brings in interesting take to see two different sides to the same story. However, when the launch comes closer, Naomi and Leo becomes closer and their views start to be shared. The story becomes more interesting as the storyline progresses when new details are discovered.

As a fair warning, Monir is known for her romance book series. Although this is a science fiction book, I assumed the romance would have an “over-the-top” appearance. I was shocked to find the romance to be in the right amount. Although some could argue that it was “instalove,” the romance actually moves in a moderate rate and wasn’t the main focus. The mission and the characters’ goal stayed the main focus in the entire story.

In the end where everything was revealed, I could not believe what happened and I went through to so many emotions. I went through shock, hatred, disappointment, and annoyance. There was even a brief stint of happiness before a certain realization. It was the end! It was the last page! Let’s just say that I am really glad that there is a sequel for this book. I couldn’t let it end this way. I did not expect to get into this book as much as I thought I would have. This was definitely a fun read.

Iranian-American author and recording artist Alexandra Monir has published five novels for young adults, including her popular debut, Timeless. A Barnes & Noble bestseller and one of Amazon’s “Best Books of the Month,” Timeless and its sequel, Timekeeper, have been featured in numerous media outlets and been published in different countries around the world. She followed the duology with Suspicion and The Girl in the Picture, both standalone YA thrillers. Her upcoming science fiction novel, THE FINAL SIX (March 6, 2018) was acquired by HarperCollins and Sony Pictures on the same week, in two major pre-emptive deals.

Alexandra is also a singer/songwriter who often integrates music into her books’ pages. She wrote and recorded three original songs to accompany Timeless and Timekeeper, which were released as the album The Timeless EP and distributed by Jimmy Buffett’s record label, Mailboat Records. She also recorded a song that was released with the publication of Suspicion, and is composing a stage musical geared toward Broadway. Her musical roots are deep, as she is the granddaughter of the late Monir Vakili, the foremost Iranian opera singer.

Alexandra Monir is a frequent speaker at middle schools and high schools across the country and at major events including fan conventions, women’s leadership conferences, and book festivals. She lives in Los Angeles with her husband and newborn son. To learn more about Alexandra, visit her online at www.alexandramonir.com.

Prize: 2 signed copies of THE FINAL SIX by Alexandra Monir
US Only
Starts: 2/25
Ends: 3/14
Direct Rafflecopter Link
Rafflecopter at FFBC