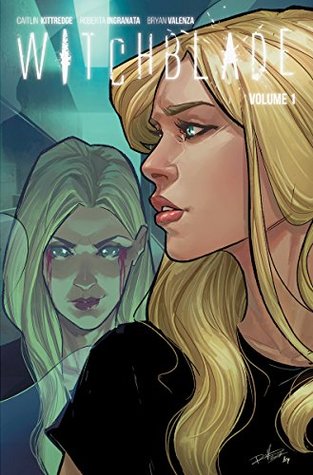 Synopsis:
Gunned down and left for dead on a New York rooftop, Alex Underwood’s life should have ended there—but instead, at the moment of death, she became host to the Witchblade, a mystical artifact that grants the woman wielding it extraordinary powers. But those powers come with a heavy cost, and Alex soon finds herself thrust into the center of an unseen battle raging on the snowy streets of NYC.

Although I did like most parts of the story that was being told, I kept wishing for something new or something different. I am not sure whether or not if I felt like the story was on a steady line throughout. I just believed there was something missing. There were a few parts that I did enjoy seeing as the history and information of the bracelet, or Witchblade, were revealed or seen in action. Perhaps if I saw more into the next upcoming volumes, I would understand the overall story more.

As for this retelling of the Witchblade series, you will be probably like it if you are a fan of the supernatural. Whether its TV Shows, books, or movies, I am sure someone will like this if they’re a fan of anything supernatural.