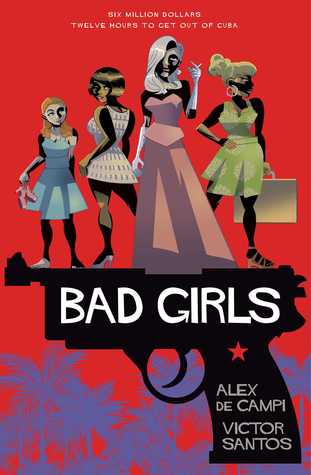 Synopsis:
In this heart-pounding, starkly colored, and visually stunning graphic novel, three women have twelve hours to get out of Cuba with six-million dollars on the night of New Year’s Eve 1958.
Gangster’s moll Carole, jazz singer Taffy, and mambo queen Ana all have their reasons for needing to escape the El Eden Casino in Havana. And on the tumultuous night of New Year’s Eve, when Cuban dictator Fulgencio Batista flees the country and the nation falls to Fidel Castro, they get their chance…with the help of six suitcases filled with stolen dirty money. Of course, it’s one thing to get the cash…and quite another to get off the island alive.

From the Eisner-nominated writer Alex de Campi and virtuoso artist Victor Santos, this story of three strong and multifaceted women struggling to leave their pasts behind in a tension-filled getaway is timely, fast-paced, and gripping.

Bad Girls takes place on the night of New Year’s Eve 1958 in Cuba. Three women appears to be deep in trouble while a fourth scouts out some island party that seems the place to be at. As the girls try to escape their troubles, trouble itself follows.

I cannot say exactly what drew me to this graphic novel, but I have to assume it was the odd style that was shown or perhaps it was an all-girls cast to a story that normally seems to be a male-type story overall. It seemed interesting and something different to read. Although it was different, it was not what I expected, and that may not even be a good thing.

When I first started the graphic novel, I was little bit interested. It was going at a steady pace, introducing everyone and the environment. It may have taken a little bit longer than it needed, but I was okay with it. As the story went on, I started to wonder what the plot of the story was. Nothing really happened until everything happened once. I did have a few questions about it. It was not confusing but more of “Could it really go that way in reality?” type of questions. It seems that the story took the characters on an disastrous, life-threatening joyride. I just could not get it sometimes. The ending was completely unexpected, but all it had was a “that’s it?” reaction.

There were a few times where the art style did not look good at all. The positions of the characters didn’t make any sense and was immediately noticeable. The color choices were the best part, but the style wasn’t up there where I hoped to be. It does make it interesting for the time period, however.