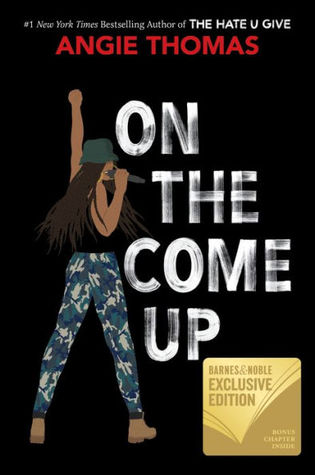 Synopsis:
Sixteen-year-old Bri wants to be one of the greatest rappers of all time. Or at least win her first battle. As the daughter of an underground hip hop legend who died right before he hit big, Bri’s got massive shoes to fill. But it’s hard to get your come up when you’re labeled a hoodlum at school and your fridge at home is empty after your mom loses her job. So Bri pours her anger and frustration into her first song, which goes viral…for all the wrong reasons.

Bri soon finds herself at the center of a controversy, portrayed by the media as more menace than MC. But with an eviction notice staring her family down, Bri doesn’t just want to make it—she has to. Even if it means becoming the very thing the public has made her out to be.

Insightful, unflinching, and full of heart, On the Come Up is an ode to hip hop from one of the most influential literary voices of a generation. It is the story of fighting for your dreams, even as the odds are stacked against you; and about how, especially for young black people, freedom of speech isn’t always free

“There’s only so much you can take being described as somebody you’re not.”

When the last page turned, I knew Angie Thomas has done it again. She has left me speechless, staring into the distance, and taking it all in. I also knew that I was going to have no idea how to write up a review worthy enough for this book. All I can do is say what I can think.

I know so many reviews have probably started with comparing On The Come Up with THUG, but what can you do when both books are just as amazing and good? Everyone wanted to know if OTCU would live up to THUG or not. How would it do? I may not be the first to tell you, but let me tell you that OTCU definitely lives up.

One of my first thoughts before opening the first pages of On the Come Up was if the novel would have that voice I saw in THUG. I was not expecting a complete identical voice, but a voice that draws you in and makes you see the story. That voice that gives a story its life. While not similar, the voice is there. That voice made me read 300 pages in one sitting to complete the book. That voice made time nonexistent as I turned page after page. On the Come Up has a voice definitely worth listening to.

Now, because of spoilers, I am not able to say much but there is one scenario that played out in the book that I paid close attention to with interest. I will not say what the scenario is and I may sound vague, but I do not want to ruin it for anyone. All I am saying is that in this scenario; do not look to far, it is closer. Also, you may scream. (I did.)

Everything in On the Come Up was great. I can’t say it enough. As I said, my words may not be worthy enough to review the book. The only words right now that are worthy enough are the ones in this book.

Also the raps in this book? AMAZING.